Genevieve Vitanzo is a vagabond. She’s been in the woods, away from all the crowd and the noise. She knows the art of taking nature in and learning from it. Hearing her stories about South Africa is an experience in itself, they sound nothing less than something out of an enchanting fairytale.

Apart from being an adventurous spirit, she’s a fantastic music artist as well. Now that she’s back in the US, she’s using her music talent and her stellar voice to hit the stages again! Every song hits you better than the last one, and her skills never cease to amaze.

In today’s episode of the dHarmic Evolution podcast, we chat with this talented singer/songwriter. We’ll indulge in her South African experiences, her love for the wildlife, and how that contributes to her musical personality. With her incredible soundtracks, she’s making an audience everywhere she goes. Let’s find out who Genevieve Vitanzo really is!

Genevieve Vitanzo tells dHarmic Evolution that she decided to go to South Africa to take a break from music. Since she was burnt out but had a very side-passion for wildlife, she decided to take some time off and travel. “I studied a little bit of it in college, but it was more of just a passion, and I loved it, and I’ve always been a writer as well as a photographer…”.

Genevieve’s roommate lived in South Africa, and eight years ago, she decided to take a short vacation somewhere sweet and low-key. Little did she know that this fun trip was going to turn her into a vagabond. After reaching South Africa, Genevieve Vitanzo worked for a township outside of Cape town for two weeks, working with a women’s group, doing wildlife species monitoring, and having fun with this new experience.

During this time, she helped track critically endangered species through the GPS trackers on the animals. She was primarily working with cheetahs and wild dogs, making sure they were okay. “I fell in love with it, I absolutely fell in love with it,” says Genevieve Vitanzo. Soon after, she talked to the authorities about starting a university program. The program idea was to bring students as an exchange program to study abroad. These would include zoology and ecology students who could have a program that they could enter directly and start working. She said that she mostly wanted to make this happen because this particular volunteer program was very heavily scientifically oriented. It would have taken a lot of benefit from dedicated people who are already studying these subjects.

While in South Africa, Genevieve Vitanzo says she also met a South African guy. He inspired her to take the plunge. She came back to the US and packed her things. Two months later, she found herself in the bush doing the priority species monitoring. Soon after, they started dating. Genevieve says she just “tagged along” with the program during this time. And after seven or eight months, they moved to a field guide training camp together. They were supposed to train the guides at the Safari. “I was running the camp, and he was training them, and it was amazing,” she says. Sadly, the artist revealed that the two had to break up. Mainly because they found they had to change ways because of their different jobs, interests, and future plans.

Genevieve Vitanzo says that she had never thought of being where she was. “I went from living in an apartment in Santa Monica to a tent with no electricity…”. Elephants outside her front door, as magical as they were, required a little getting used to. It was terrific, but it was hard to be so disconnected from everything she had come from. She says that Cape town is quite cosmopolitan; it has everything you’d expect a major city to have. But, not everything is as accessible as you’d like.

“The closest store is sometimes 2 hours away, and that’s not even a big store like a Target. You’re talking about some tiny shop that has about 30 items”. Genevieve Vitanzo says you have to plan everything and “roll with the punches,” and adapt. The adventurous singer/songwriter and music artist also adds that being in such an environment slows you down. It gives you perspective, and you notice things. She says that she wasn’t a person who would see the birds chirping. Or even the kind of person who would notice other sounds around her. However, that changed when she went to South Africa and started living in the bush.

Wilderness & How It Makes You More In-Tune With Your Senses

“Thousands of things would be running through my brain at any given minute. But it stopped in many ways because a lot of times, I didn’t have a choice”. Since the artist didn’t have social media or any other distraction around her, Genevieve Vitanzo says that she became more vigilant. She also says she’s become attentive to nature’s details. Moreover, Genevieve Vitanzo says that we live in a society where we’re taught the use of our eyes as a primary sense. Since so many things are camouflaged when you are in the bush, you have to start using other senses. Especially your sense of smell and hearing. Your eyes become valuable for tracking, noticing prints and patterns on the sand, and determining how fresh or old they are. So, the emerging music artist says being in the wild makes you more in-tune with all of your senses.

Music In The Wild

Genevieve Vitanzo says she had to put music aside for a while when she was in South Africa. For the first two years, the artist said she didn’t have any way of using a piano, her specialty instrument, as she’s still learning how to play the guitar. Since keyboards require power and space, she couldn’t find a way to play them while living in a tent. She said that when she started moving to places with plugs and switches, she brought the keyboard along and returned to music.

Soon, she began writing songs, making music and met people who had similar interests. Some of these friends had their studios, and when they realized that she was an artist and a singer/songwriter, they were very enthusiastic about working with her. Genevieve Vitanzo sang jingles, commercials, background songs and sometimes recorded her own music and songs. So, after two years of staying separated from her musical talent, Genevieve slowly started getting back to her fundamental passion – music.

When asked how she felt about moving away from music, Genevieve said that it was hard for her as an artist. She said that as much as she loved the wildlife, music has always been her “first love.” Vitanzo says music consumed her and helped her through her isolated time in the bush. “I started singing before I even started talking. I still have my 20-year old iPod. That thing was my savior. It went everywhere with me; I loaded it with music” Genevieve Vitanzo confessed to dHarmic Evolution that isolation is difficult.

According to  Genevieve , you think you’re going to love it, and you do, for about a week. Then, when you start realizing that this isolation has become longer than you thought it would be, the reality begins to hit you. You start freaking out, thinking about what you had and would probably not have for a while now. “Not having the outlet of music that I have had my entire life during my stressful times…. was somewhat frustrating.” In the interview, she tells us that when she came back to the U.S and completed her albums, she regretted not having recorded the classic animal sounds in the wild. She said that animal sounds are the music in themselves, and tweaking them a little bit can create a nostalgic song and a masterpiece that everyone can relate to. As an artist, she missed those sounds.

On Being A Workaholic

In response to our question of how Genevieve manages all the different brand and song ideas that she gets and whether it’s frustrating not to implement all of them, Genevieve Vitanzo says focusing on one single thing at a time can be challenging for her. If Vitanzo is doing what she likes, she’ll be fully indulged in it. However, even though she’s so passionate, she is also very selective about the things she is interested in. Because of this characteristic, it can take a while for her to find something. Something that would ignite the spark within her. Choosing what to focus on is her primary challenge and concern, says the talented singer/songwriter. But, once she’s decided and chosen a song, project, and idea, she can clear out all the mess and get to work!

Throughout the interview, the incredibly talented artist, Genevieve Vitanzo, made us realize how important little details are. And also how we usually dismiss them as white noise. Her experience in the wild where she talks about how she began to pay more attention to environmental sounds and details, was inspiring to hear. We were happy to learn that this exposure had a significant positive impact on her personality, perspective, and lifestyle as an artist.

However, probably the most important aspect that Genevieve brought to light was that being able to do something that you love comes at a price. More often than not, it requires many sacrifices and compromises. Since she wanted to pursue music and become an adventurous wildlife enthusiast, she had to give up financial many things. Her stability, relationships, and many other things that we take for granted in our everyday modern lives.

All of us at dHarmic Evolution are humbled by Genevieve’s experiences. Her story serves as a reminder of the possibilities that can open up if you only find the courage within you to follow your passions. For more inspiring stories of musicians and artists, check out our podcast here.

Genevieve Vitanzo is a singer/songwriter and a producer based in L.A. She took a break from music. Soon after, she disappeared into the South African bush where she pursued her passion for wildlife conservation.

2. What kind of music does Genevieve Vitanzo create?

Genevieve Vitanzo’s music spans multiple genres. She incorporates elements from the folk tradition and adds touches from jazz, blues and pop. Her vocal range is equally dynamic and allows her to sing across genres.

3. Where to listen to Genevieve Vitanzo music?

Find Genevieve Vitanzo’s music by visiting her website. You can also listen to her soundtracks on YouTube. Be sure to check out her albums, “The Sum of all Things”,  “Back to L.A” and “This Little Thing Called Life”.

4. Where to listen to a podcast with Genevieve Vitanzo?

dHarmic Evolution’s chatted Genevieve Vitanzo in an exclusive interview. You can listen to the full podcast here.

dHarmic Evolution have curated a Spotify Playlist for your listening pleasure. Included in this playlist are select Indie artists from the dHarmic Evolution Podcast where the future Indie Stars of Tomorrow appear today! Check it out here. 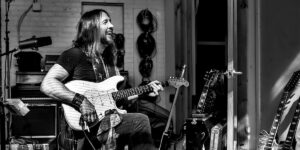 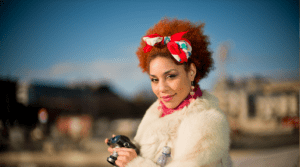 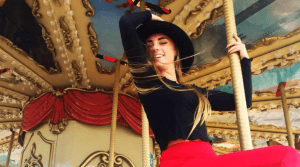