Stuart’s passion for music began at just 11 years old, when he received his first guitar. The son of an American military family, he learned his first two songs while in Italy – a local pop song, and “Gloria” by Van Morrison. He had all his firsts in Rome: his first kiss, his first cigarette, his first fight. Then he traveled, from Europe to Miami to L.A – playing in dive bars and street corners for tips, and performing in a number of bands.

As the President of Nia, Stuart used his business savvy to expand the company’s scope and reach into new markets. He channeled his love of music into creating Niasounds, a division of Nia that successfully brokered licensing agreements with artists such as Moby, Norah Jones, and Paul Oakenfeld.

Stuart is back at the guitar with new drive. His first self-titled album was produced by Rob Daiker, a Portland producer who has worked with Dan Reed and Slowrush. Stuart’s vocals seamlessly dance from gritty-bluesy to smooth-romance and are delivered with honesty.

A versatile and prolific songwriter, Stuart infuses his work with raw and tender emotions. He desires to ignite in others the fire which has been relit within himself.

Don’t forget to subscribe, rate, & review the show in itunes, we love when you do this! 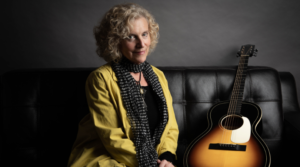